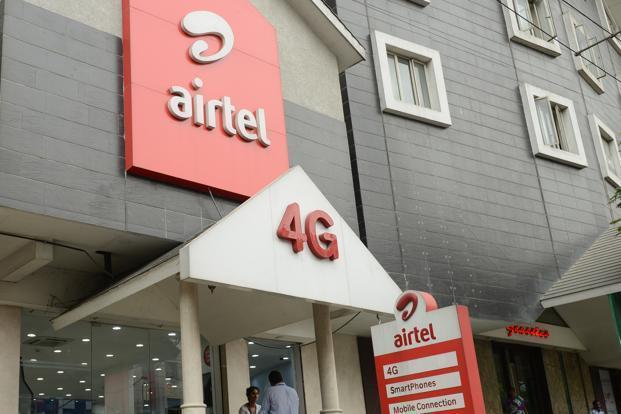 Bharti Airtel remains the operator with the fastest Download Speed Experience in India, according to OpenSignal’s latest report. When it came to the highest 4G availability, Jio continues to lead, though rival Airtel bettered its scores significantly in the category.

Bharti Airtel remains the operator with the fastest Download Speed Experience in India, according to OpenSignal’s latest report. OpenSignal’s Mobile Network Experience Report for India for October 2019 revealed Airtel was on top with a score of 9.6 Mbps, which a megabit faster than closest rivals Vodafone and Idea.

Reliance Jio continues to lead in the highest 4G availability, though rival Airtel bettered its scores significantly in the category, according to the report. Here’s a look at the detailed finding of OpenSignal’s report on mobile networks in India.

The top player with download speeds on mobile networks

Bharti Airtel was on top with 9.6 Mbps speeds when it came to downloads on mobile networks (includes 3G and 4G technology). According to OpenSignal, while Airtel was the leader, its overall score grew by less than 1 Mbps from their last report. While Idea and Vodafone had 7.9 and 7.6 Mbps download speeds respectively, the two also saw the greatest improvement in this category. Their current overall scores grew by at least 2 Mbps, according to OpenSignal. Jio was still below its rivals at 6.7 Mbps, an increase of just 0.4 Mbps. BSNL, which is still a 3G-only operator, was at 3.1 Mbps.

In just 4G download speeds, Airtel customers experienced above-average speeds of 10 Mbps. Both Vodafone and Idea came close with scores of 9.7 and 9.2 respectively. Jio was still at 6.7 Mbps. But in just 3G download speeds, BSNL with 3.1 Mbps was slightly ahead of Vodafone’s and Idea’s score of 2.8 Mbps, and at least one megabit ahead of Airtel.

Reliance Jio remained on top in 4G availability and now stands at up to 97.8 percent in the last six months. Rival, Airtel showed the highest improvement in this category. Airtel’s scores in 4G availability increased by three percentage points to hit the 90 percent mark. Idea’s highest score of 89.7 percent in Chennai and Vodafone’s score of 87.9 percent in Ahmedabad did not manage to cross the 90 percent mark in this category.

The top player with upload speeds on mobile networks

In upload speeds, Idea was the winner with a leading score of 3.2 Mbps. Vodafone stood at 3.1 Mbps. Airtel’s score was 2.4 Mbps, while Jio stood at 2.1 Mbps. Both Airtel and Jio were significantly lower compared to Idea and Vodafone in this category. BSNL’s score stood at just 0.9 Mbps. As OpenSignal points, upload speeds are becoming more important as consumers are uploading videos, photos to popular platforms. The popularity of TikTok, Instagram means customers need more reliable upload speeds to post their content on these platforms.

Airtel continued to be on top of this position. It had an improvement of more than 8 points since OpenSignal’s last report. Airtel’s rating was Fair with a score of 53 points out of 100, according to the report. 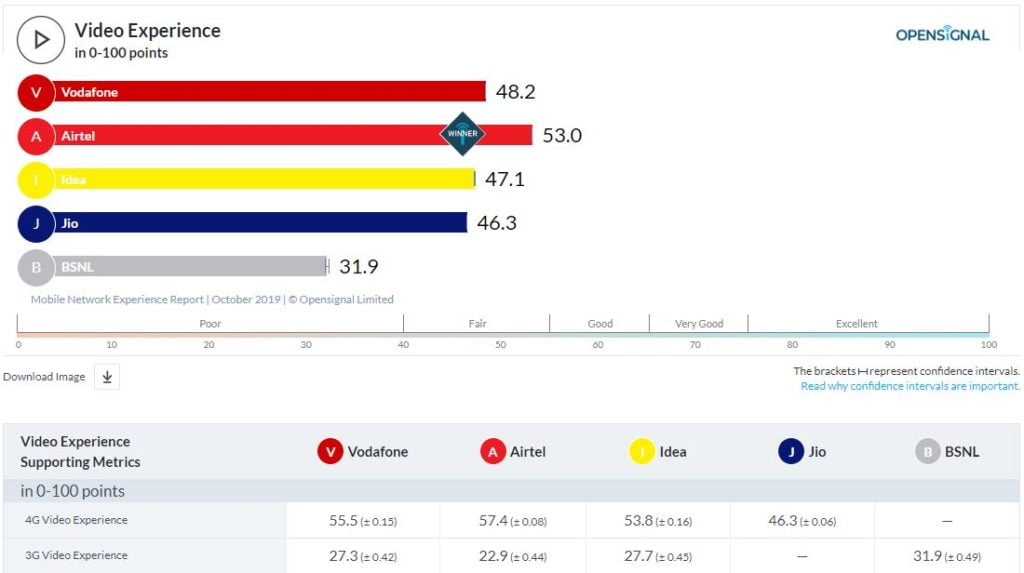 Vodafone, Idea, and Jio had scores of 48, 47.1 and 46 points respectively, and also earned Fair ratings. But, according to OpenSignal, the fair rating implies sluggish video load times accompanied by stops and stutters mid-stream, especially on higher resolutions. This means India’s mobile operators still have a long way to go in order to improve video viewing experience on 4G or 3G networks.

This report also looks at the Voice App experience for the first time. Vodafone was the operator to win the award in this particular category. Interestingly all four major operators earned a Poor rating in this category. The Voice app looks at the voice experience on apps likes WhatsApp, Skype, and Facebook Messenger, which are fairly popular in India.

Jio leads in keeping latency low with fastest network response time of 54.2 milliseconds. Airtel was a close second at 57.1ms, Vodafone and Idea had higher latency at 64.2 and 74.5ms respectively. In latency, the lower number implies a better experience. The lower the latency is on a network, the better the experience on a host of mobile applications and services, from web browsing and Voice-over-IP to real-time multiplayer gaming, explains OpenSignal.

Vodafone Idea Partners With Home Credit : Now Smart Phones Can Be Availed from Rs 799 Down Payment