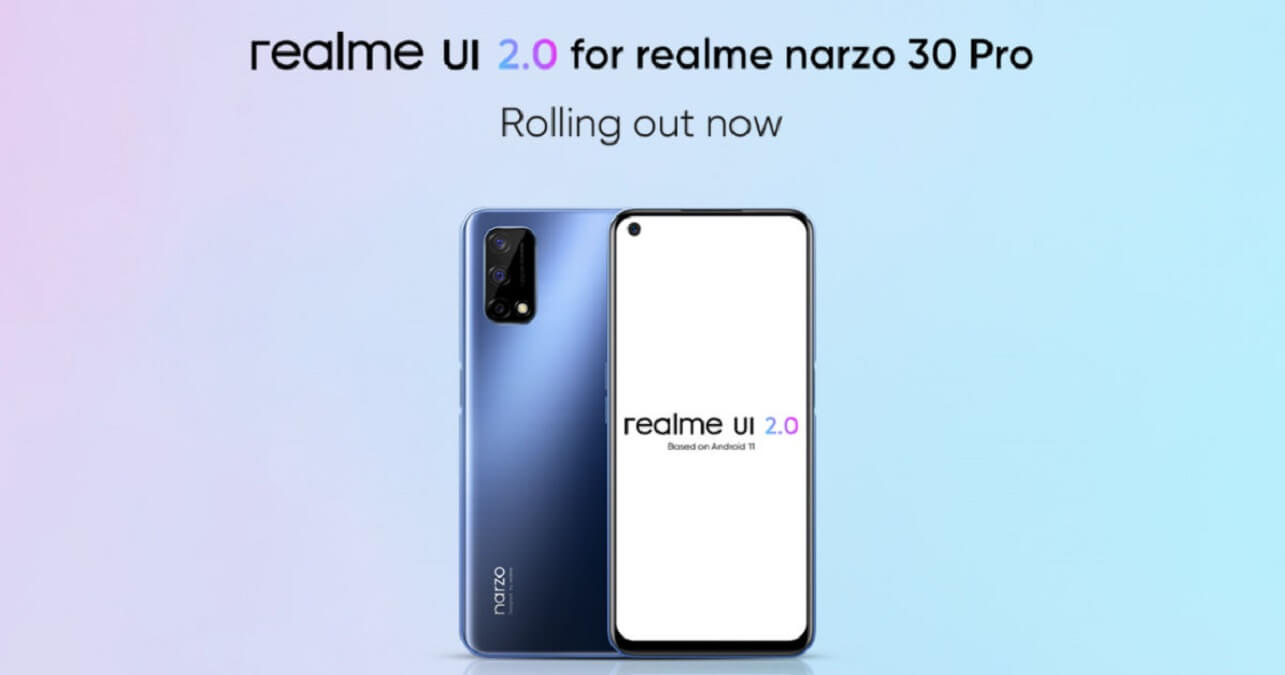 Realme has started a stable version for UI 2.0. Realme UI 2.0 will be based on Android 11. It will get unlimited customization options. It will get Gen Z Imagination and Creativity. The stable version program aims to make the experience of Realme Android 11 based UI 2.0 for the first time.

Chinese smartphone brand Realme has released a new update for the recently launched Realme Narzo 30. The company has started a stable version for UI 2.0. Realme UI 2.0 will be based on Android 11. It will get unlimited customization options. It will get Gen Z Imagination and Creativity. The stable version program aims to make the experience of Realme Android 11 based UI 2.0 for the first time. The Realme UI 2.0 stable version will be rolled out and updated in limited devices. However, later it will be rolled out to more and more devices.

The update for the Realme Narzo 30 Pro 5G (Review) was announced through a post on the Realme Community Forum. Detailing the update, Realme announced a host of features, bug fixes, and improvements that are bundled with the Android 11-based Realme UI 2.0 update for the smartphone. As mentioned, the 5G smartphone was launched with Android 10 out-of-the-box.

One of the new features that the smartphone gets is categorised under Personalisations and lets the user create their own wallpaper by picking colours from the photos in the gallery. Other new personalisation features include third-party app icons support, new Dark Mode styles that include Enhanced, Medium, and Gentle.

Users can now drag text, images, or files from a floating window or from one app to the other in the split-screen mode. Additionally, the Smart Sidebar editing page has also been optimised. Realme Narzo 30 Pro 5G users can now remove a folder or combine two. The launcher also receives filters — name, install time, usage frequency — for Drawer Mode.

Realme has also added ‘Tone tunes’ to the Narzo 30 Pro 5G. Furthermore, users can now determine the duration of the Do Not Disturb mode. It also gets new weather animations, optimised vibrations for text input and gameplay, and optimised auto-brightness. Users will also be able to turn on or off App lock directly from the Quick toggle menu. The smartphone is also getting enhanced SOS functions, quick emergency information display, and optimised ‘permission manager.’

Realme Narzo 30 Pro 5G is based on Android 10 OS and this smartphone works on MediaTek Dimensity 800U processor. This smartphone has a 6.5-inch Full HD Plus display with a screen resolution of 1,080×2,400 pixels. Punch hole design has been given in the display of the phone. In this, users will get 5000mAh battery for power backup, which will come with 30W Dart charge support.

A triple rear camera setup has been given for photography in Realme Narzo 30 Pro 5G. The primary sensor of the phone is 48MP, while it has an 8MP ultra wide angle and 2MP macro shooter. The phone has a 16MP selfie camera with a punch hole cutout for video calling and selfie. In terms of connectivity, features like 5G, 4G, WiFi, Bluetooth, GPS and USB Type C have been provided in this smartphone.