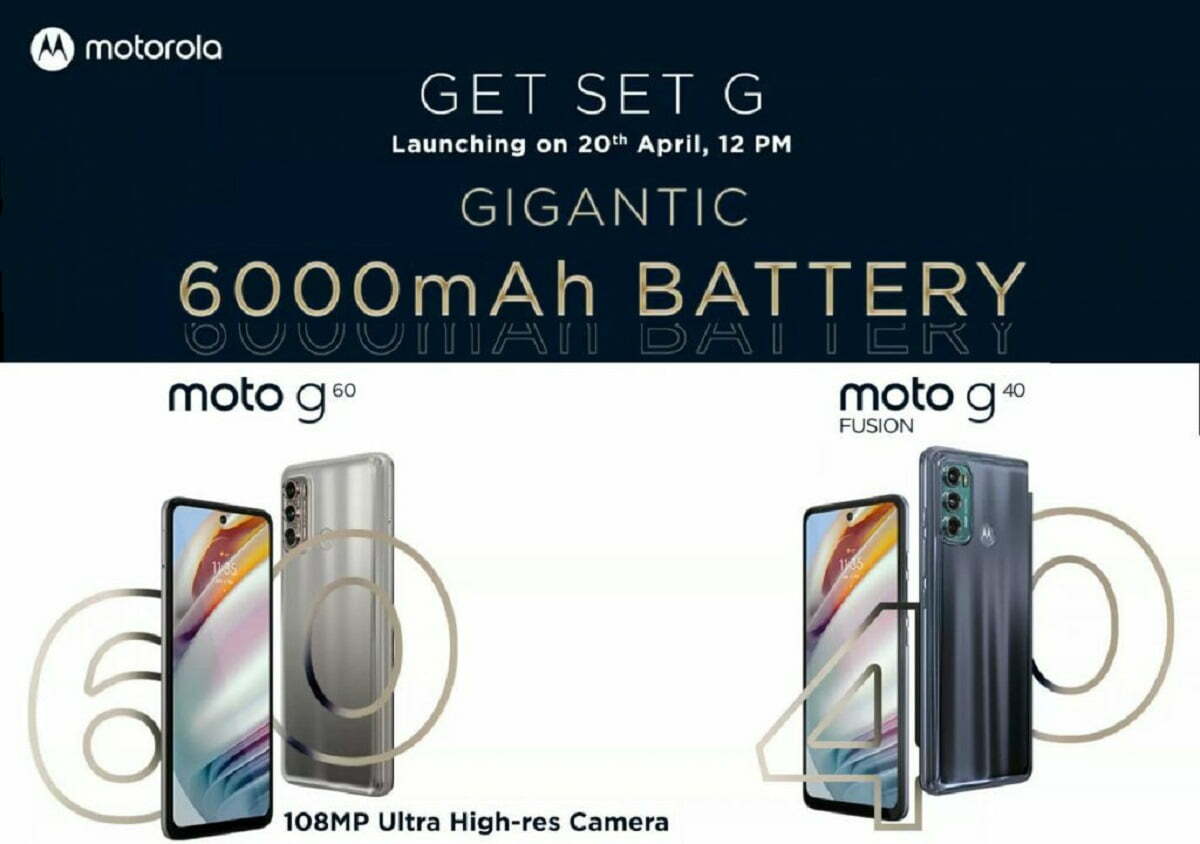 Moto G60 and Moto G40 Fusion are going to knock in the Indian market on April 20. Both smartphones will be made available for sale on Flipkart. The Moto G60 will get a 108MP camera. While the Moto G40 Fusion will have a 64MP camera.

Smartphone maker company Motorola is going to launch two handsets Moto G60 and Moto G40 Fusion on April 20 in India under the G-series. The micro-website of both devices has gone live on the e-commerce website Flipkart. It is clear that both smartphones will be sold from Flipkart. Talking about the specification, a 108MP camera will be given in the Moto G60. While users will get a 64MP camera in the Moto G40 Fusion.

According to the company, the launching event of Moto G60 and Moto G40 Fusion will begin on April 20 at 12 noon. This event can be seen live on the company’s official YouTube channel and Facebook page.

According to Leaks, the Moto G60 can be priced between Rs 30,000 and 40,000. On the other hand, the Moto G40 Fusion will be available to customers in the budget range.

Moto G40 Fusion will feature a 64-megapixel main sensor on the back. Apart from that, the phone is teased to have the same display and processor as Moto G60. Motorola has partnered with ThinkShield for end-to-end mobile security solutions. Moto G60 may come in Blue and Grey color options, whereas Moto G40 may come in glossy Blue and Black color options.

Moto G60 key specifications have been teased on Flipkart and Twitter. The phone will run on Android 11 OS. It will feature a 6.8-inch hole-punch display with a 120Hz screen refresh rate and HDR10 support. The phone will be powered by the Qualcomm Snapdragon 732G SoC and it is teased to pack a 6,000mAh battery. On the back, Moto G60 will have a 108-megapixel main camera, an 8-megapixel macro/ ultra-wide angle sensor, and a depth sensor as well. At the front, the phone is teased to feature a 32-megapixel selfie camera placed inside the hole-punch cutout placed in the top center.