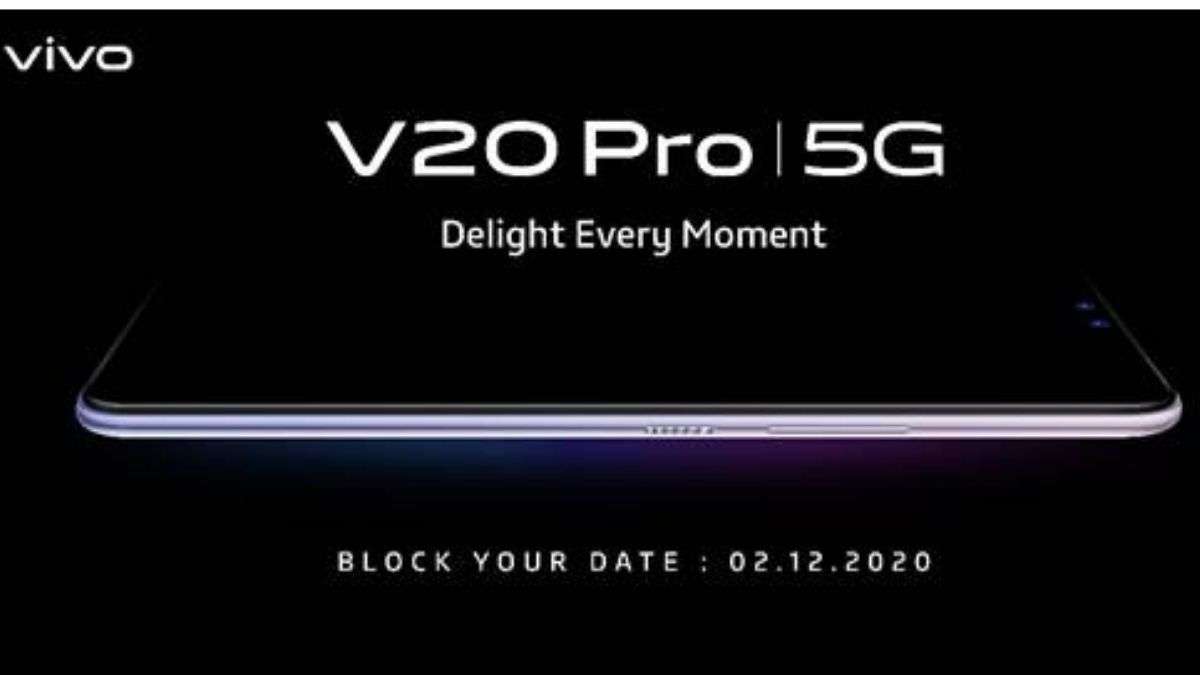 Vivo V20 Pro smartphone is going to be launched in India on 2 December. Talking about the feature, this smartphone will have Snapdragon 765G processor and a 4000mAh battery.

Vivo is set to launch its premium smartphone, the Vivo V20 Pro, in India next week. The company has sent out invites for a virtual launch event on December 2, which comes sometime after Vivo launched its mid-range variant, the Vivo V20, earlier this year in India. The Vivo V20 Pro is set to join a handful of 5G phones in India, and alongside 5G connectivity, Vivo is emphasizing the camera performance of the V20 Pro — in particular, the eye-tracking autofocus feature of the front camera.

The smartphone has already been launched in Thailand, and according to its images, looks nearly identical to the Vivo V20 on all fronts. The only key identifiers that are different in the Vivo V20 Pro, in comparison to the V20, are the 5G branding to the phone’s rear, and the slightly wider notch accommodating the dual front cameras.

More attention will be on how Vivo prices the V20 Pro, which will also define how it fares against its competition. Reports on the matter have so far speculated that the phone may cost Rs 29,900 in India. In Thailand, the Vivo V20 Pro was priced at THB 14,999 (~Rs 36,600). At such pricing (around Rs 30,000 to Rs 35,000), the Vivo V20 Pro’s prime competitors would be the OnePlus Nord and the Google Pixel 4a among Android devices, and the Apple iPhone SE 2020 otherwise.

Dual front camera has been given as a special feature in Vivo V20 Pro smartphone. It includes a 44MP primary sensor and an 8MP secondary sensor. There is a triple rear camera setup. The phone has 64MP primary sensor, 8MP ultra wide angle and 2MP monochrome sensor. It has a 6.44-inch full HD + display with a screen resolution of 1,080×2,400 pixels. This smartphone is equipped with Qualcomm Snapdragon 765G processor. For power backup, it has a 4,000mAh battery with 33W fast charging support. The phone has 8GB RAM and 128GB internal storage.

Having said this, the company had earlier launched Vivo V20 SE in India. The price of this smartphone is Rs 20,990. The Vivo V20 SE smartphone will come with a 6.44-inch FHD + AMOLED display. The phone will come in a 3D curved design. The fingerprint scanner will be supported as a security feature on the phone. Vivo V20 SE will work on Android 10 based on Funtouch OS 11. Qualcomm Snapdragon 665 has been used as a processor in the phone.

A triple camera has been given on the rear panel of the Vivo V20 SE smartphone. Its main camera will come with a 48MP AI lens, which will have an aperture f / 1.8. At the same time, an 8MP wide-angle lens will be supported as a secondary camera, which will have an aperture f / 2.2. The 8MP super wide-angle camera gives a 120-degree panoramic view, while a 2MP lens has been given for the Bokeh effect. The 32MP lens will be supported on the front panel of the phone.